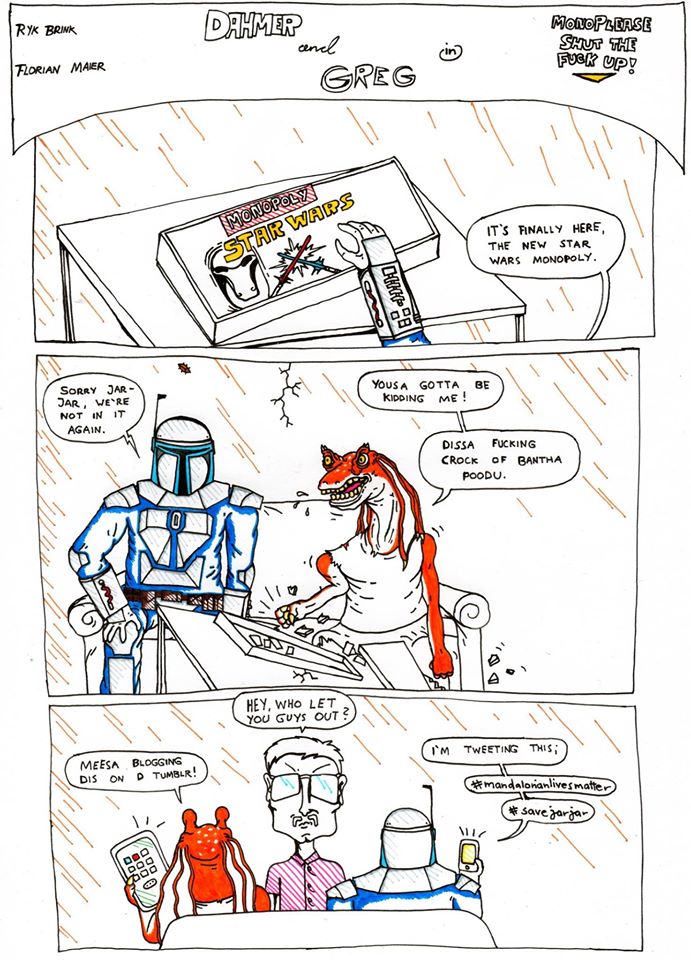 Ok I said I would tackle this ‘issue’ just for fun, this might not be what some were expecting when I said I’d rant about the monopoly thing but who cares, this is my opinion, don’t like it write an angry comment I can ignore and go on with your day.
When I first saw this article I wasn’t that surprised. Recently it seems like the current generation are just prone waiting for the next minor injustice to be offended by. And then let everyone on twitter know what amazing progressive wunderkin they are for being offended at said non-issue first and receive the most pats on the back from their like minded drooling idiot followers.

So down to the ‘problem’ at hand, with the release of the new Star Wars movie, the force awakens. The force was awakened to a bunch of new star wars related crap parents are forced to buy their squealing offspring to secure their love for another year. One such piece of crap was a set of star wars the force awakens monopoly.

So far so good, monopoly, harmless capitalism in a box with a star wars theme, not the first time and probably wont be the last time a new set of star wars monopoly is released. But the ‘big deal’ about this new star wars and this new set of monopoly is that the new main character of this current incarnation of star wars happens to be a carrier of a holey vagina. And that said character was not featured in the set of monopoly, oh shit I should have put a trigger warning in there, I’m sure by now people are foaming at the mouth and snapping their problem glasses in half.

Obviously the internet is in an uproar, over monopoly, no seriously.
“It’s sexist” “Holy misogyny batman” “But the force awakens in Rey!” Wah wah wah, it’s just fucking monopoly, who cares? These idiots care, idiots who inject feminism and gender and race into every stupid fucking thing and just can’t let anything go.

Here are the offensive monopoly pieces in question as you can see, not a vagina between them, what a travesty.
So the characters from left to right are; Return of the Jedi Luke Skywalker, Finn, Kylo Ren and Darth Vader.
The theme of the board game was heroes vs villains so you have two heroes vs two villains, now this to me is the first point of contention. Anyone who watched force awakens knows there was only one villain because no one counts Ron Weasley’s older brother, Captain Phasma who has like three lines and Darth Golem. They would never make good pieces to go alongside Kylo, who would want to play as Emperor Snoke? He’s not this hugely fleshed out character and he just spends the entire movie sitting down looking menacing.
The thing I think a lot of the internet’s pearl clutchers overlook is the fact that if Finn was substituted for Rey I think the shitstorm would have been equal if not worse, with Black lives matter taking a shit on Hasbro’s lawn and wiping their asses with Chewbaccas face.
Really you’re between a rock and a hard place in terms of representation, and star wars has always been poked at by race baiters and other idiots for having a white character voiced by a black man because that’s racist… for reasons.
But “hold on” say the shrill masses of the internet, “Why don’t they just have Rey and Finn?” Well yeah that would solve all the problems except the two villains required, you can’t just have Vader next to Kylo when Vader is dead in that movie, so you’d have to replace him with Phasma or Snoke.
Bare in mind this monopoly set would have been mass produced months before the movie was even in cinemas so they have no idea how well the movie will do let alone how well characters like Phasma and Snoke will track. In my opinion this is Hasbro trying to straddle two markets to insure themselves against another possible star wars flop. They decided to include Luke and Vader so as to ensure the set would sell even if the movie didn’t because Vader and Luke will always sell you can always bank on the original trilogy making money.It would have been a total gamble not including those original characters.

The other argument I hear is “Why don’t they just make more pieces?” yeah well why don’t they include a dye cast model of the bar scene in mos eisley or a life size model of the yoda training scene in the dagoba swamps? Because it would cost too much fucking money. Every company has a projection for how much money they want to make and how much they’re willing to spend and obviously four pewter figures was the maximum amount they wanted to mass produce per set because four players is the optimal amount for one game of monopoly.
And again if they included Rey who would be her adversary? There’s still only one villain in the force awakens, you can’t just have two Kylo Rens that’s dumb.

Another ‘controversy’ from kneejerk morons on the internet was over this Millenium Falcon toy because again it doesn’t have the vagina having wonder aboard.
“SEXISM” MUH-SOGGY-KNEES!!!”

Is it though? Notice anything else missing from this piece, ahem, Han fucking Solo perhaps??
Yeah Rey and Han aren’t included because this was made long before the movies came out and probably released before or at the same time as the film and those character’s aren’t included to prevent spoilers for the movie itself. So it’s not that Finn is more important because he’s male because the fucking robot is included but Han is nowhere to be found.
But the bottom line is toys like this are aimed at boys, no matter how ‘progressive’ you are you have to realise not all toys are aimed at every type of child.
Toy companies make money by appealing to a particular demographic and they do this by product testing and market projections. And despite this wave of progressive feminist thought, little boys still like playing with action figures and space ships more than little girls and probably wouldn’t play with a female action figure.
I mean there’s probably the odd one or two male childrem that will play with a female doll and a girl that might like a space ship over a barbie but toy companies don’t make toys for the minority of kids, they make them for lowest common denominator because that’s how you make money.
In conclusion this is just another example of idiots on the internet with dumb agendas trying to push them by ignoring the all the facts and twisting every non-issue into a way that somehow oppresses them for some contrived reason, nothing to see here people, move along.

Thanks as always go to Florian for doing the art on the strip, if you want to see more strips and more of Florian’s messed up art, head to the Jeffrey Dahmer and Greg comic page for more fucked up un-pc humour.