Cur Chapter 12 ‘The burning of the temple’ 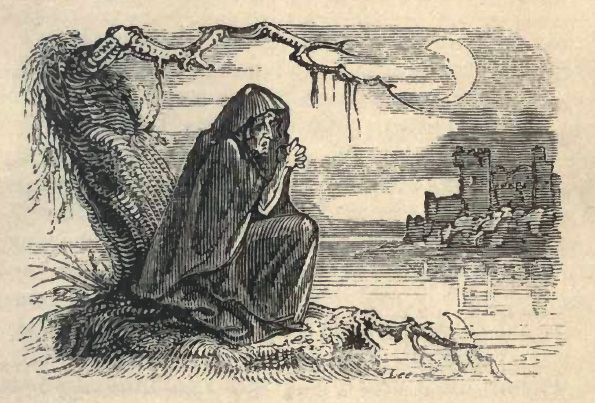 –
The smell of smoke, darkness, crawling, blackness, air.
Dian Cecht coughed and spluttered as he dragged himself crawling and blackened out of his escape tunnel. Gasping at the fresh air.
“Well it’s good to see you again, old friend” A mocking voice said above his head.
He turned over, scrambling in the ashes, stunned to hear the familiar voice, his face black with soot and his eyes wide and frightened. He waited on his knees in the dark for the shapes to emerge from the smoke laden sky.
“Y-you!” Dian Cecht mumbled grasping at a clump of black earth beneath him.
“Me” Bres smiled atop his horse, his men behind him, looking down at the great healer.
Dian Cecht lowered his head, his hands splayed out in front of him. “You’re too late, she’s already gone from here, a day’s ride ahead of you, you’ll never find her.”
“Of course I will, you’re going to help me” Bres laughed and crossed his hands over his saddle.
Dian Cecht put his hands on his thighs and looked at the dirt knowing that he was right. “I may be a coward, hiding in that place but you! You are cursed by all the gods for desecrating that holy site!”
“Desecrating? Me? The king of Inish Veil?” He laughed looking around at his men. “Surely you are mistaken, it was a mere accident. So many candles in Newgrange, this was bound to happen sooner or later. A little mouse must have knocked one over and set fire to some old dry parchment and woof! The whole temple up in flames” His men who chuckled, all but one. Ogma gritted his teeth holding his hand to his ear wishing that both his ears were cut off and his eyes gouged and his tongue pulled.
“You should kill me now” Dian Cecht said almost begging, his hands tightening above his knees.
“Why would I do that, we’re in need of a good healer, we have a wounded man after all, Ogma show him your ear” He said turning in his saddle. Waving Ogma to approach.
Ogma tried to smooth out his face. Remove any of the disdain he was feeling as he removed his hand from his head showing Dian Cecht the place where his ear ought to have been.
“I can’t grow back an ear, not without my lab that you just burnt to the ground” His tone suddenly changed from wounded animal to righteously indignant.
“Tsk tsk, these accusations are very dangerous, we all agree it was just a mouse, don’t we” He said to his men who nodded and laughed.
“That temple was-“
“That temple was here long before us. Some robed fools with long beards decide it has mystical significance, it means nothing to me – or the mice as it seems” He laughed.
“So what is to be? Will you come with us or return to your burning temple?” Bres asked, already knowing the answer but enjoying it all the same.
Dian Cecht face gave up an elasticity it once had and he slumped visibly. “I will”.
“Good, take him” Bres instructed one of his men turning his horse to ride on along the path.
“You didn’t have to do that” Ogma said through gritted teeth holding his ear once more, looking past the king.
“No maybe not but you’re yet to understand the stakes of this game, allow me your trust in this matter.” Bres said softly.
“You could have talked to him.” Ogma said through gritted teeth.
“I just did talk to him” Bres smiled “What’s one dusty old tomb?” Bres breathed in heavily looking out at the lush pastures, the sweetness of the dew mixing with the bitter scents of smoke and ash.
“It sits in the shade of the stone of destiny itself” He cursed.
“And yet the stone is untouched as it rests on the hill of Tarah, do you wish to make a pilgrimage to it brother?” Bres turned his head, his voice full of scourn and accusation and derision. His eyes scanning Ogma up and down as if it was the first time they’d met.
Ogma could say nothing, his tongue seized in his mouth. His anger simmering below the surface of his stony grey flesh.
“We don’t have time to sit around flapping our gums, the fate of Inish Veil is at stake.” Bres straightened in his saddle, pulling at the reins of his horse, looking over the horizon.
“How is that?” Ogma shrank from him, his face twisting.
“Your job is to follow my orders, not to question them, now ride on!” Bres said sternly.
Ogma grimaced, swallowing his pride. “Yes sire.”
–
“It was the Fomori.” Abhartach said, his eyes fixed and glassy as if he were manically reciting a nursery rhyme.
“That fairytale again” Birog scoffed.
“It won’t be like last time” Abhertach scolded, looking at Birog as if she had grown another head. “They have a new king. In the time of Nemed they used force, might was all they knew. They forced the people to submit, enslaved them. They put a tax on them; two thirds of their corn, two thirds of their milk. And two thirds of their-“ Abertach’s jaw grew tight and he swallowed, his throat clacking dry.
“-Children” Birog shuddered.
“You know the stories then? You know what happened. “His eyes lit up and the dwarf became enervated with wild hand gestures. “The people, our ancestors the children of Nemed rose up and killed one of their kings in his tower, Conand. But their other king Morc retaliated and decimated the people of Nemed with a great wave and a plague that came from the sea. A cataclyism that scattered our people and changed us forever.”
“You expect us to believe all this?” Birog tutted.
–
Behold the rest of the chapter over on initt, huzzah! The burning of the temple