Great googly moogly, the day has come and that day is the 2nd of may, and that kind of rhymed, how special.

Everything is set, got the final cover as the head image, the edits are done, I don’t know about audiobooks yet but it’s all a go and I’m set to go on another podcast the day before it launches, which works out great. Got my advanced reviews hopefully coming in, gotta shake some people down for those. Prices are gonna come out at 99c for the ecopies for a limited time, then they’re gonna shoot up the exorbitant price of $2.99 bwaahaha!

Updates updates, almost finished GS2 and I’m proofreading as I go in between spamming GS1 and I did a short story for an anthology which was fun, I’ll probably post that at some point. I’m actually really looking forward to finish this book because this next series I know is gonna be the shit. But I’ve had so much fun writing GS2, it’s criminal, and this one is so much better than the first. The action, the comedy, the satire, the drama, all wratcheted up. I’m slowly building an actual story here too, so it’s not just a bunch of zombie ‘stuff’ happening haha. I’m very satisfied with it.

I also have some awesome ideas for the new cover, so I can’t wait to get that going. I just love creating and spending my money on cool shit more than I actually like making money haha. I will die poor, in short. Poor but with a satisfied grin on my face.

Gonna have some full cover mock ups below with the blurb and everything.

So pretty time all round. 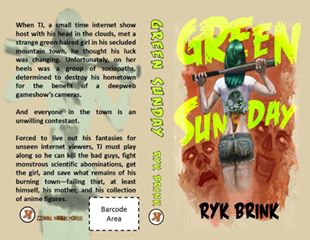