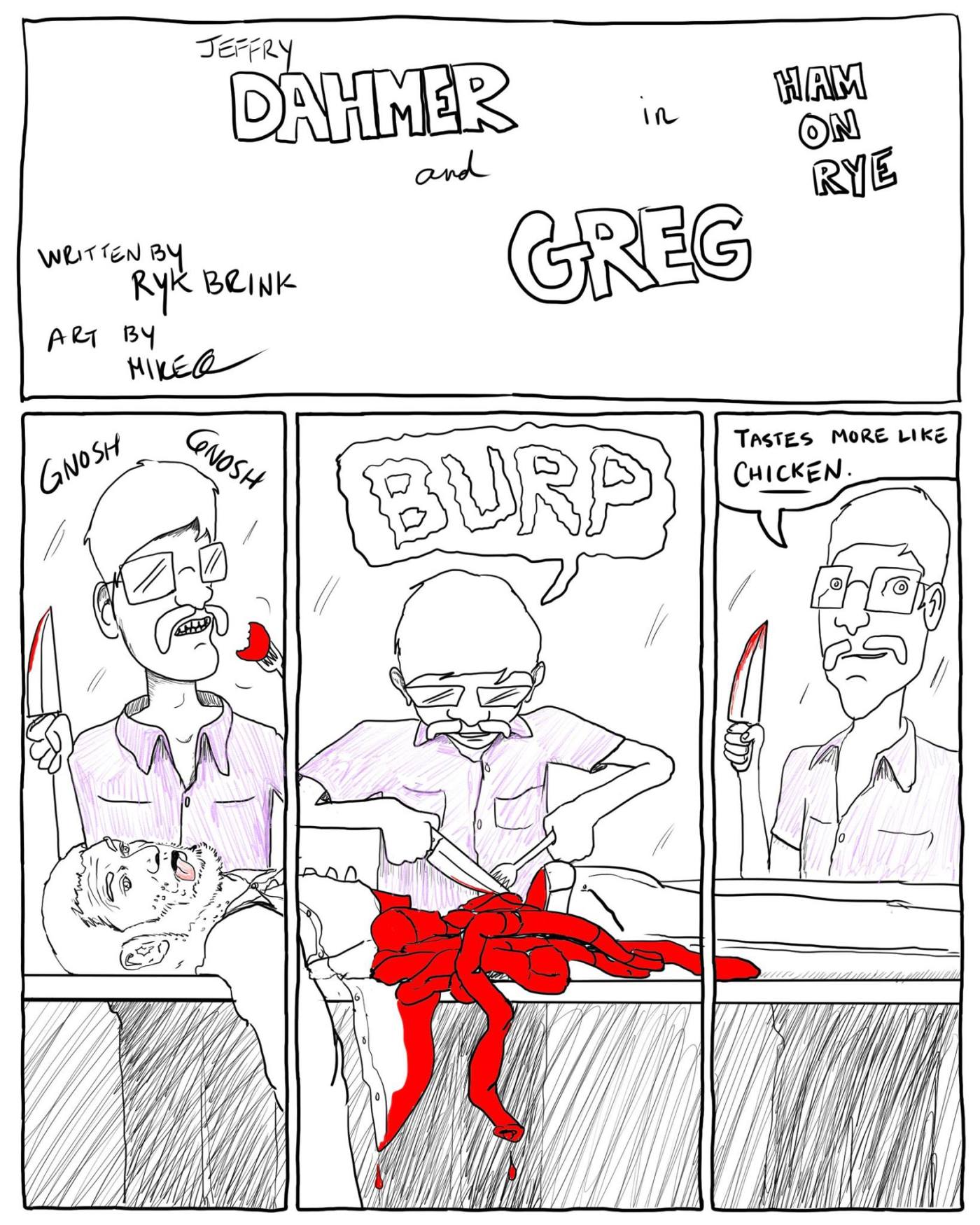 First I must apologise for my absence to my readers (all three of you), I’ve been deathly ill with some unknown pathogen and haven’t been capable of doing much more than playing payday 2 endlessly and coughing up chunks of lung.

With my return I decided to share one of my older Dahmer and Greg sketches, this was a guest piece by the guy who does the art for 3 Ring, the one and only Mike (Now Ike, there was already a Mike Golden in comics) Golden. And use it to address a current trend I’ve noticed or maybe it’s just me.

It’s become quite ‘trendy’ so as to say mainstream or socially acceptable to mock Christianity and creationism and Catholicism and all that jazz. This is not to say I have anything against them being mocked, quite the opposite as you can see from the strip, I did it myself.
I feel any and all beliefs should be rife for scrutiny and parody at all time without exception.
I personally consider myself an atheistic Satanist but that’s a long story in regards to why I don’t call myself an atheist anymore, which is tangentially linked with this but a bit too much of a digression, don’t want to hurt that flow.

I think its fine and necessary to mock all beliefs and anything that isn’t nailed down including and especially atheism, which is why Trey Parker and Matt Stone of South Park will always be heroes of mine for leaving no stone unturned for parody and having the balls to carry it through.

I think I may have touched on this before when I talked about the Isis cake thing, but I do think there’s a reticence in the left or at least the social justice left to criticise Islam when they’ll happily mock Christianity and get a million retweets on twitter.

But that’s not really what I’m trying to get at, the overall point I’m trying to make is that mocking Christianity has as a result of it becoming socially acceptable it’s become boring and meaningless, oversaturated. It would be like making a pedo priest joke, everyone’s heard them all. There’s not bite anymore, I guess with this new wave of social justice warriors I’ve garnered a new found respect for Christians. I don’t in any way believe in objective morality but after seeing the depravity and solipsism of moral relativism, I can appreciate the goal of seeking moral objectivity despite it obviously being impossible.

I think to myself if I had kids who would I prefer them to be brainwashed by a feminist or a Christian? I come up with Christian every time. I mean there’s not a lot of difference really, both will tell them they’re broken pieces of shit that need this overbearing force in their lives to get right with. Both will tell them only through them can they be saved and both will say anyone that disagrees with them is an idiot or a bigot. But the Christian will at least instil them with some sense of morality even if it’s for a completely ridiculous reason when the feminist will just ask mindless obedience to whatever scattered ideal they have at the moment.
Maybe if you gave social justice and feminism a couple thousand years more it would be a better or a more solid religion than it is but right now it’s all over the place.

I think that’s way with all culture to be honest, once it becomes mainstream and socially acceptable is the point it stops being edgy and it stops making the point it made before. Christian beliefs if you truly believe them literally are silly, let’s face it but allegorically they’re not that bad, a lot of the book is pretty inconsistent and is relative of the time for most of the bullshit about justifying slavery, I’m by no means being an apologist for Christianity but moreover the most radical of Christians are just fucking annoying, they don’t blow (usually) blow your shit up or cut your head off on camera or try and get you fired from your job and destroy your life for disagreeing with them on the internet.

So to me hating them seems like a waste of energy, I don’t agree with them, I don’t support them; I just think it’s better than tumblr. The bible is better than tumblr there I said it ha-ha (I’m full of shit, I’ve never read either). I just can’t summon the energy to hate them when there are forces amassing in power that are far more insidious than some 2000 year old Jew zombie cult. It just leaves a bad taste in my mouth, like someone smacking an old donkey. It’s like how it’s sort of socially acceptable to be racist and sexist towards white guys, even among white guys, these people, these sjws think they’re counter culture. They think they’re not mainstream, they’re edgy and hip, they couldn’t be more wrong, they couldn’t be more mainstream, they are the establishment and the sooner people realise that the sooner they’ll fall apart.

Forgive this dazed sickness induced rant, just been rambling incessantly from one abstract point to the other incoherently and I must put it to a stop right now and get back to trying not to die.
Peace out!