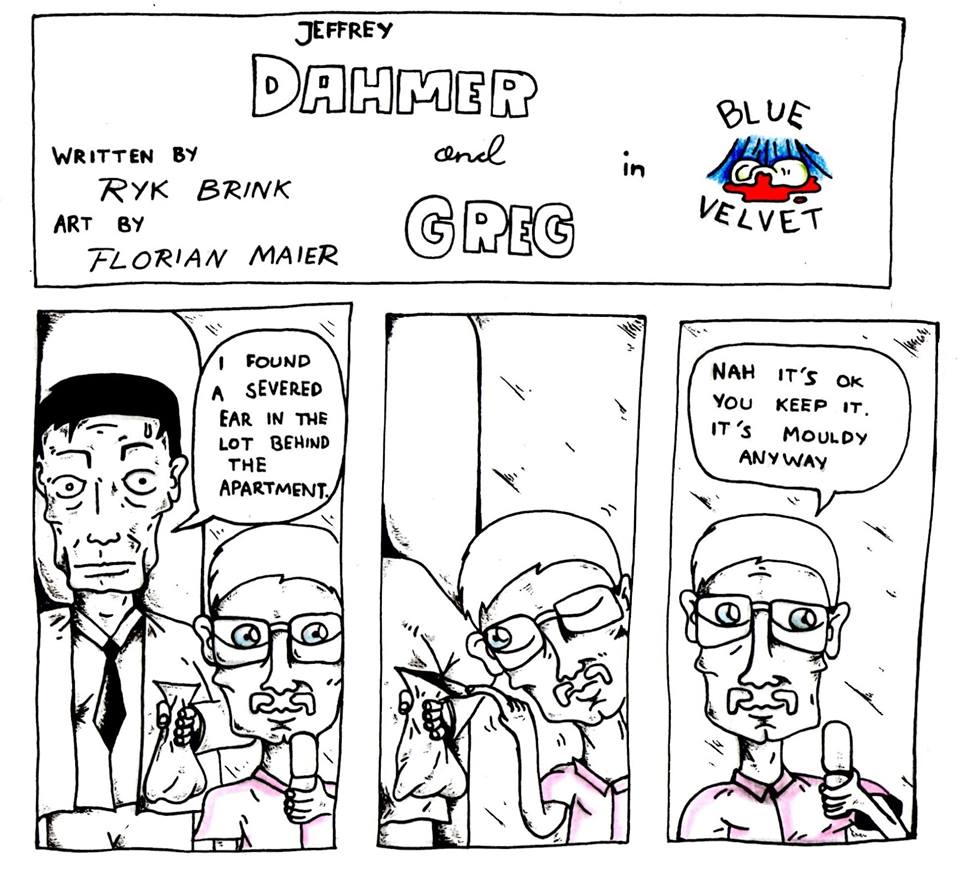 It sounds more and more pretentious every time I say it but one of my biggest influences when I write right now and in the creative process in general is David Lynch.

Which is odd to say it’s pretentious because Lynch’s work, I find remarkably unpretentious, so distinctly odd without necessarily trying to be, just unrestrainedly uncommon and intriguing. Every one of his films and Twin Peaks is almost like someone took the idea of film making or a tv show and handed it to an Alien and he made his own interpretation that was like what had come before but so drastically but indescribably different. Something you just couldn’t put your finger on but it was rolling around in your brain itching in the corners of your eyes and just couldn’t get it.

I’m not a lifelong fan, I had seen the Elephantman and Dune but I think I was too young to have been caught up in Twin Peaks at the time of its release and those two movies are probably the worst ones to watch in retrospect. Both films are constrained by one being true and the other being based on a sci-fi novel.

So he slipped through the cracks, while I was quite happy with my Tarantino’s and my Scorcese’s and whomever else grazed my adolescent movie palate.

Until I saw a film that really struck an odd note with me that sticks with me even now and no it wasn’t actually by David Lynch *plot twist* it was by Jennifer Lynch, his talented daughter. The movie was called Surveillance, a really haunting off kilter thriller, I love even to this day. But what really stuck with me was the sound track.

The music was haunting and jarring and really something else, I couldn’t help tracking down the soundtrack and finding my favourite song from the film which was called ‘Speed Roadster’ written and performed by… David Lynch.
Who was this alternative/electro/country sounding singer I’d never heard of but couldn’t get enough of; oh what he’s the director’s father? And he’s a writer/director (/among other things, painter/actor) as well? Wow.

Then rather ashamedly I started to put together the dots and I had heard a lot of talk about I think True Detective and how it was ‘like twin peaks’ which in some respects is true. It does capture that haunting sorrow of the unavoidable nature of life and the boundless horror of the unknown (a little Lovecraftian in that respect too, despite it being based on the Yellow King mythos). I may be rewriting my own history here, I can’t be sure, so instead of watching True Detective I watched Twin Peaks (And then eventually True detective) and I was captivated, a little bored/confused at times but I had to keep watching.

There was just something about it, something that made me want to laugh but also cry bitterly and it held me in this state between sorrow and a drunk sort of happiness and each emotion seemed to feed off the other and deepen, the depths of the humour dug larger holes for the sorrow to hide and when the credits rolled over Laura’s face you remembered why you were here.

Frankly I was amazed that such a compelling show could be written about one murder, I can hardly concentrate long enough through an episode of csi or the walking dead where the cast drops like flies.

It was amazing that one fictional person’s life could touch so many people in so many different ways and although she wasn’t technically a character, Laura was the show.

So I initially got into David Lynch not even knowing he made films or tv shows, I just thought he was a weird old guy that made cool music. I loved introducing my brother to Lynch because we watched all his films together and I can’t remember if we watched the Twin Peaks movie Fire walk with me first or not but he hadn’t seen the show before watching. There’s this bit where some weird shit happens and my brother turns to me expecting me to know what the fuck it means because I watched the show and I was like; ‘Dude, I don’t fucking know’ and it was pretty funny.
I was told it didn’t matter if you watched the movie or the show first but I’m glad I watched the show first because it completely depicts Laura’s murder, something I think should never have been done.

In the classic Poe style mystery, the greatest mysteries are the ones that go unsolved.

But producers and ratings and money and bing bang boom, they ruined the whole mystery and then the show limped on after until it eventually keeled over with the help of Billy Zane??

Season 2 in my opinion is a complete clusterfuck, I hold out hope for the reboot, but I intend to keep my expectations as low as possible and coddle myself in the warm embrace of my favourite Lynch films, Blue Velvet being one.

The thing that separates Lynch from any other of my influences is that I not only learnt a lot about story telling from him but also about the creative process in general. I think it’s in a Tom Waits song (Of which the name escapes me) where he says David Lynch told him that he had to sit in a comfy chair and close his eyes and wait for the big one to come along.

Although he may have been alluding to his transcendental meditation woo of which I am not subscribed (I can sit in a chair with my eyes closed without paying like ten quid a month to some swami or whatever) as a fan of Lovecraft this struck a chord with me.

There’s a part of me that is deeply sceptical of woo, all things woo but there’s another part that believes that stories are located in a river in a different dimension and when we close our eyes and concentrate we can catch the odd big fish.
All stories are essentially the same in structure but the core principals of the story come from somewhere else, they’re pieced together from dreams and movies and conversations and some ultra-terrestrial other or just plain pulled out of your ass.

But sometimes I can’t help feeling that I’m not creating stories, I’m just uncovering something that was already there or giving life to something long dead and that makes the hairs on the back of my neck stand up, despite it most likely being bullshit it gives me a nice Lovecraft boner, like I’m in my own story and some ungodly horror is going to burst into the room and tentacle rape me.. what was that noise? On the stairs, it can’t be…*gasp* my eyes, my ey..*indiscernible screaming*.