Took a while and its probably gonna be the last for a long eternity because I’m kinda spent creatively right now, but I have time considering that new job is yet to start and it could be fucking months until it does. Still pissed about that, who the fuck offers someone a job when they aren’t sure it even exists??? I did two interviews for this job and filled in a shit tonn of paper work only for them to come back and be like “Well we had some internal hires so we don’t need that position filled right now”. Well it would’ve been good to know that before applying for the job, or can I even get a different job, no I have to wait for this one to be vacant which could be months.

But I don’t know what I should do, should I wait or just apply somewhere else. It probably would be in my best interest to wait because I have a foothold already in this company because I knew someone that worked there and I’ve already put in so much time and effort trying to get it. And not to mention my old job is about to hit the christmas shitstorm which is really profitable (but miserable) for me.

So I was thinking I might start doing Diana part 2 just because I’ve run out of fucks and I think it might be more fun and grounded to write and it gives me an excuse to get back into rereading Dexter instead of these mediocre shadow pulps. It depends on how I’m feeling next week but I have time, so I might as well. Just can’t take this infernal fucking waiting. It’s like the next stage of my life, the best chapter is right over the hill but I have to wait, but it feels like I’ve been waiting my whole life already. And on the otherside my little girl might be waiting further off in the distance, way off somewhere, but I’ll be with her eventually I know it.

I was actually about to write a review for Outer Worlds and shit all over it just because it’s so hot right now haha. I got gamepass so I could play it cheap and I’m quite far into it and not really feeling it honestly, it’s more borderlands than fallout imo. Not to say it’s bad, it’s ok, it just could’ve been so much better and it feels a little safe or just meh. Don’t wanna spoil my review but I was playing it last night and decided to drop it and play red dead redemption instead haha. That’s the first one not the shitty prequel, the one that’s actually fun and interesting and not a boring 30hr horse simulator. I forgot how good it was, classic rockstar at its best is a force to be reckoned with honestly which is why rdr2 hurt so much. Basically I want to give my Outer Worlds review a little more time, just to give a fair shake, I was gonna write it before I completed it but I might do a Prey 2006 review instead and give Outer Worlds a chance to redeem itself.

Anyway short and sweet, this is the end of the Swammy Karl/Riki kung fu tranny arc but it might not be the end of this part because originally this was supposed to be about the gunsmith character but I sort of got carried away with the mimes and stuff and he got squeezed out haha. This segment was supposed to be an interesting seque into that story but it just took over the whole part with the power of self indulgence haha. So it’s not finished, I’ll come back to it at some point – Ryk 2019

See you…
–
“What are you doing?”
Pookie looked up as he lay prone covered in mud and probably chicken shit and feathers.
“Trying to catch, that beast, I guess” Pookie sputtered.
Jersey was perched high on the rafters of the barn out of sight talking up as if to herself. Her slight but confident voice echoing through the large richety structure. “What for?”
“Training?”
“Training? Training for what?”
“…”
She sighed and said “I see” She said nothing for a moment as Pookie looked up at her leg dangling from the rafters. “What do you want? An apology.”
Pookie snorted “What for?”
“For trying to kill you”
“You were trying to protect him right?”
“Yeah.”
“Do you love him?”
She said nothing for a moment, seeming to freeze, as if the words sent electricity through her whole body. She sighed, releasing the tension in a long breath and spoke softly as if to no one in particular. “Have you ever met someone that didn’t want anything from?”
“Can’t say I have, but I don’t get out much.”
“A person that would do anything for anyone and not ask for anything in return?”
“No” Pookie said thoughtfully.
“He’s an idiot, people like him don’t last long in this world.”
“He seems like he can take care of himself.”
“You think so?” She laughed. “He’s not like us, not like you” She looked straight ahead as if trying to see a face in the wood grain. “He can’t kill, it’s not in his nature, he’ll always be the frog and we’ll always be scorpions.”
“I’m not sure I get that reference.” Pookie snorted.
“I’d die to protect him, I’d kill, because there needs to be more people like him in this world, or it won’t survive, can’t survive. It wouldn’t be worth surviving in at all without people like him!”
“Trannies?”
“No not, what!? Forget it, you wouldn’t understand, you’ll just keep chasing chickens until someone faster than you ends up killing you. There are a million guys like you in this world, you really think you’re that special?”
Pookie didn’t say anything, but for a moment his face gave Jersey a window, a glimpse of that lonely orphan boy and she knew she’d said too much, been too flippant.
She sighed “Sorry, I can be a real bitch sometimes” Her voice softened. “The trick to catching chickens is… you have to predict their movements, you can’t just reach out and grab them or they’ll flutter away. You have to move with them and follow their path or they’ll just get away from you.”
“Thanks”.
–
“Here’s your… thing!” Pookie said as he dropped the chicken on the crude wooden kitchen table in front of Riki and Brandon.
“What?” Riki asked quizzically.
“You told me to chase chickens… as part of my training.”
“I don’t remember telling you to do that.”
“Huh?”
“I asked you to get eggs for breakfast and then you disappeared for an hour.”
–
As the sun was setting the fires had died. The gnoxious billowing smoke from the tents had turned into a light aery mist that hung over their crumpled deformed shape.
“What happened here?”
“You don’t know?” Pookie asked the strangely dressed man.
“Not a clue” the swammy said incredulous as he looked over the mounds of smoldering plastic and fabric.
“Ha, I guess it was just a coincidence” Pookie chuckled to himself.
The swammy turned to face the clown samurai. “How did you know I’d come here?”
“You said so.”
“I don’t think I did” The swammy said.
“Oh, you sure about that?”
“Quite sure.”
“Well for the sake of plot convenience lets pretend you did.”
The swammy gave an odd sidewards glance at the clown and said. “You’re not the one I expected to meet.”
“Yeah well, can’t always get what you want.”
“Well, I can’t disagree with you there.” The swammy laughed a little sadly. “I wanted to be known for my skill, I travelled all over this godforsaken land to learn and bring them something they’d never seen before. But no one understands, I wanted respect, wonder, not fear. I thought joining the circus would change that but it’s the same, no it’s worse. The circus is run on fear and misery, I wont go back, you wont make me and neither will those damn mimes.”
“I’m not here for that” Pookie said as he readjusted his sword.
“I see, so you’ve come here to die.”
–
“For the boy that can’t smile, for the clown that cannot laugh.” The old man said as he stretched out his open hands, resting in them a strange and colourful sword.
The boy took it in both hands without a word. His face rich in the colours of their order, bright and shining. The smile painted over the stolid face of despair.
The boy opened it with a stiff jerk, as if breaking a seal, it pulled away like it was stuck. A horrible canned mocking laughter was released like a poisonous gas that sent chills up the boys spine.
The old man smiled and said “Cool huh?”
The kid studied the sword sceptically looking at the gawdy leds that made up the eyes of the devil face on the pommel but still he said nothing. The look on his face a mix of wonder and complete whatthefuckism.
“This sword will smile for you, it’s blade will laugh for you and if you point the devil at your enemy and pull this it might just save you from the brink of death.” The old man said as he flicked the mystery draw string tucked into the handle.
The boy instantly reached for the pully. The old man smacked his hand away.
“Not now, and not ever” He said sternly. “The other will make the sword laugh, that one you must master, it’s sound will bring joy and strike fear in the hearts of many.”
–
If you like this sort of total nonsense head on over to inkitt.
October 29, 2019 0

3 ring samurai part 3 chapter 6 ‘The carnival is over’ 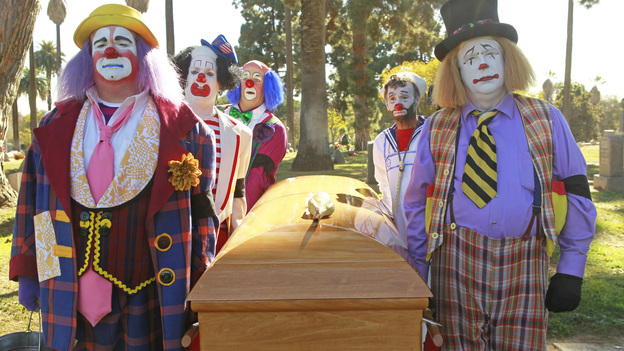