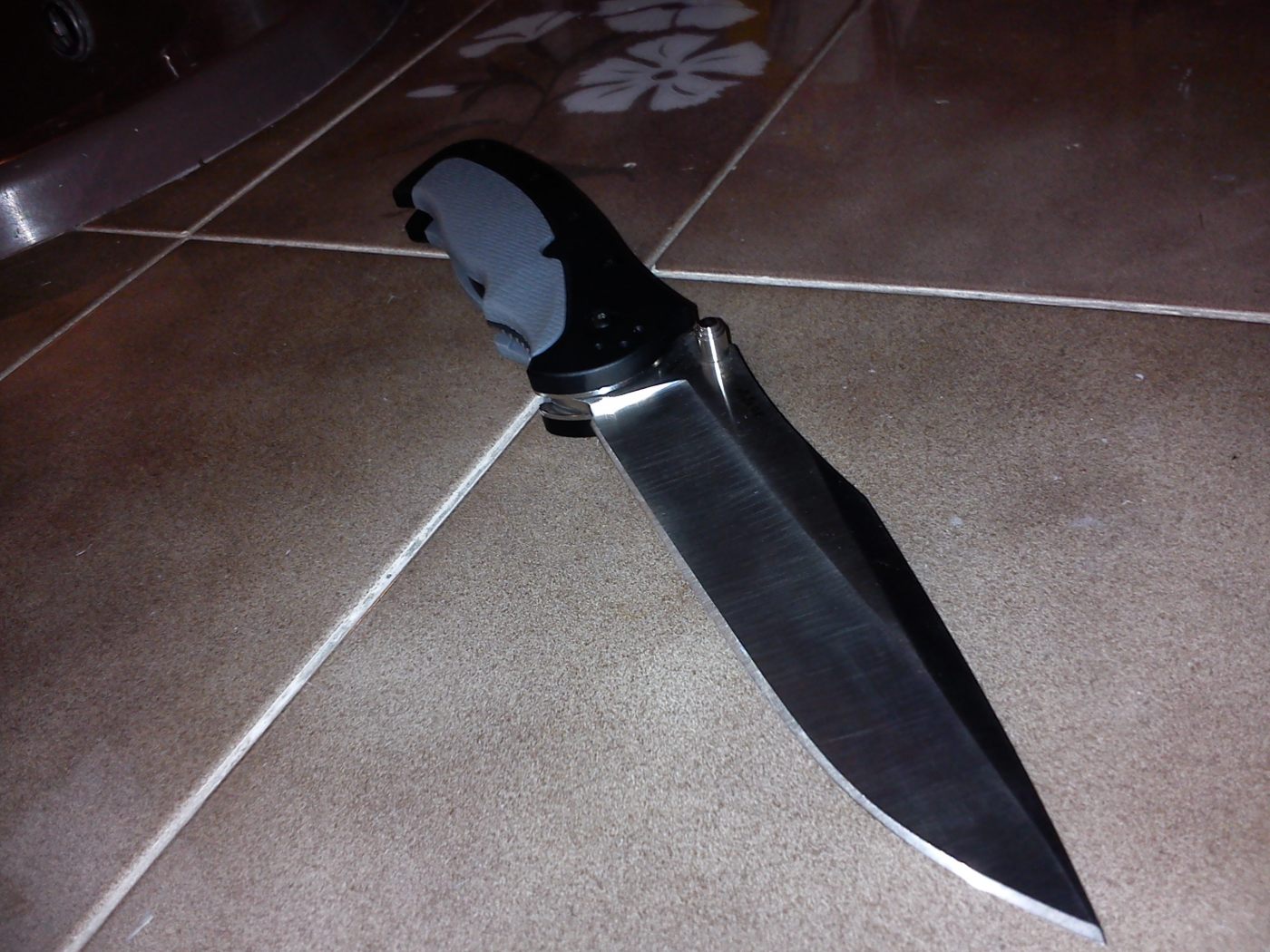 That’s ‘LARGE FOLDING KNIFE’. I know what you were you thinking, you were thinking it stood for ‘fucking’ well now it does, because I say so.

I thought I’d do something a little different, haven’t done a knife review in a while and this has been a nice little show piece for me for a long time. I’ve done these big shiny “zombie killer” knives now I want to bring it down to a nice ‘little’ and I use that word lightly, folding knife.
I know some people have their issues with benchmade and a lot of their knives I think are overpriced but their quality can’t be beaten in my opinion, but never before did one of their knives really jump out at me, until the Harley Davidson LFK.

I can barely fit it on the internet haha. It’s a big folding knife, you get a few of these kicking around and they’re usually ridiculously expensive and completely useless (Cold steel looking at you).
Because they have these big flashy blades but because it’s a folding knife it has to have this big clunky handle for the knife to fold into. Now you’re realising that, you’re looking at the LFK if you’re a knife guy thinking “Wtf? Where does the blade go?”.
I know, take a second look, the blade is longer than the handle, what sort of witchcraft is this you ask? Of course folding knives have to fold into the handle so the handle has to be longer than the blade to make sure the cutting edge is fully covered when it goes in your pocket. So that you don’t need to go home and wash the blood out of your underpants.
This knife is a little different, it actually has this little plastic fin that comes out of the handle when you fold the blade back to cover the tip and top portion of the knife that overshoots the handle.

Now you might be thinking, “That’s kind of dumb, what’s the point of that? Why not just make the handle longer”. Well if you’re familiar with knives and centrifugal force you’d understand that how a knife moves in the hand is relative to the length and shape of the handle. So a big long clunky handle limits your range of motion, slows down strikes and basically gives you less control over the blade tip. If you were using it in wood working or bushcraft it would be annoying, if you were using it in a last ditch effort to defend against a zombie you’re worm food buddy haha.
I can’t say I’d reccomend taking on the undead with a folding knife but you could do worse than this big fucker measuring something in the ball park of five inches (would have been good to get the specs up in hindsight haha) that’s huge for a folding knife. Any bigger than that and you’re entering ridiculous territory of; “Why not just get a fixed blade?”
Essentially this a folder that moves and feels in the hand, just like a fixed blade of the same size. The grip is this rubbery substance (could be rubber, worst knife reviews ever haha) and it just sticks in your hand like glue. The blade came sharp out the box, shaving sharp. It locks up nice with the standard liner lock, so fuck you lefties like me, gotta close it with two hands unless you flip it like I do it. The finish is beautiful, it comes in black but I went for the satin because it’s just a lovely looking knife.
It’s very well made, you can open so fast with that big blade, it swings out like an automatic, it’s just so well made, it opens like a dream and you just have this huge beast of a knife coming out to great you. I mean if crocodile dundee had been held up with this he may have had pause to think.
That’s a lot of blade to walk around with in your pocket, so the question is; “Do you really need all that blade in your pocket?” and the answer is no not really. If you’re using it as an everyday carry or just for folding knife stuff like light bushcraft, you’d be fine with a four inch or lower knife. You could be just as happy with a little spyderco knife like a delica, that would do everything this could do and maybe more due to it’s size.
If you really wanted or needed a knife this size you could just get a fixed blade and not have to worry about that plastic fin snapping which is a massive worry I have about this knife and why I would never use it outdoors unless I really had to.
Also you know on a practical level it’s just easier to clean a fixed blade knife if you were gonna use to hunt or skin animals or something as barbarous as that and not like me who just puts them on a nice shelf to collect dust and show to his mates haha.
For a folder it’s impressive I give it three zombie dicks out of five for it’s potential zombie murder and if I couldn’t carry a fixed blade for some reason and I wanted it for personal protection (if that was legal in the uk or it was the zombie apocalpyse) I would still probably use my spyderco military to be honest haha.
Don’t get me wrong, I love this knife, it’s beautiful and well made, but for me it’s more of a good show piece, a good talking piece. It’s impressive and it comes in this nice little pouch with a belt loop (which is great because the pocket clip isn’t reversible, another fuck you to lefties like me haha) so you can take the pocket clip off all together and just hold it like any other fixed blade.
Overall I love it, but it stays on the shelf.

2 thoughts on “Review of the Benchmade Harley Davidson LFK”